They say that laughter is “the best medicine,” and as it turns out, there is some scientific truth to this assertion. Humor-associated laughter has numerous health benefits, so here are 11 reasons you should laugh it up.

1. LAUGHTER IS A SIGN OF GOOD WILL TOWARD OTHERS.

Laughter may be unique to humans. Why do we do it? According to a 2010 study in BMC Complementary and Alternative Medicine, laughter and smiling are generally intended as a message of good will. The authors extrapolate that there is a similar function in primates, who use facial expressions with bared teeth to suggest friendliness and sociability. They write, “Because some forms of smiling are voluntary and easily faked, laughter, which requires a more synergetic contraction of the wider musculature, is believed to have evolved in humans to express a secure, safe message to others.”

2. LAUGHTER MAY REDUCE YOUR BLOOD PRESSURE.

High blood pressure (hypertension) is one of the most dangerous side effects of stress, as well as a huge risk factor for heart disease and stroke. However, it’s hard to be stressed when you’re laughing, so researchers have investigated whether laughter can bring blood pressure down. There are more than a few studies that show a reduction of blood pressure after laughter, such as a 2017 study in the Journal of Dental and Medical Research, where 40 patients undergoing hemodialysis listened to CDs of comic shows for 16 30-minute sessions over eight weeks, and saw a decrease in blood pressure.

In 2011 researchers presented results of a three-month-long study at the American Heart Association’s Scientific Sessions. Researchers exposed 79 participants to either a music or laughter therapy. Laughter was stimulated through “playful eye contact” and breathing exercises. Immediately after sessions, the blood pressure readings from the laughers lowered by 7 mmHg—(millimeters of mercury, how the blood pressure readings on a sphygmomanometer are abbreviated). In comparison, music therapy only brought blood pressure down by 6 mmHg. 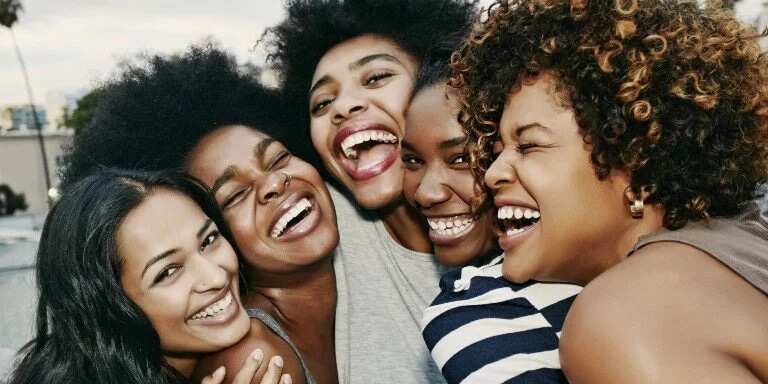 3. THIS HAD LED TO A TREATMENT KNOWN AS LAUGHTER YOGA.

The success of laughter studies on blood pressure and other ills has led to a unique kind of treatment known as “laughter yoga.” Dr. Madan Kataria, founder of the Laughter Yoga School, told Medscape, “You don’t need any jokes, any humor, or any comedy. You don’t even need to be happy. What we do is laugh in a group and initiate laughter as a form of bodily exercise, but when we have eye contact with others, this laughter becomes real and contagious.”

Kataria led a study of 200 male and female individuals who participated in laughter yoga sessions for 20 to 30 minutes. The researchers stimulated laughter in the participants for between 45 seconds and one minute, followed by deep breathing and stretching for the duration of the sessions.

Subjects who laughed saw a reduction in their systolic blood pressure of more than 6 mmHg, a significant change from baseline and also significant when compared with a non-laughing control group. Diastolic blood pressure was also significantly reduced. In addition, their levels of cortisol, a stress hormone, were also reduced. As a result, laughter yoga has gone on to be used as an intervention for a variety of health issues, ranging from stress to dementia.

4. LAUGHTER CAN REDUCE ANXIETY AND OTHER NEGATIVE EMOTIONS.

A 1990 study in Psychological Reports looked at the effects of humorous laughter on threat-induced anxiety. Researchers led 53 college students to believe (falsely) that they were going to receive an electric shock after a waiting period.

Subjects in the experiment group listened to a humorous tape while waiting for their shock. The placebo group listened to a non-humorous tape, and the control group did not listen to any tape. The humor group reported that their anxiety decreased during the anticipatory period, and those with the highest self-reported level of sense of humor had the lowest reported anxiety. Laughter therapy has also been shown to improve anxiety in patients with Parkinson’s disease [PDF], reduce anxiety and depression in nursing students, and improve optimism, self-esteem, and depression in menopausal women.

From a general psychological perspective, author Bernard Saper suggests in a paper for Psychiatric Quarterly that the ability to maintain a sense of humor and the ability to laugh can act as positive coping mechanisms to help a person get through difficult times. 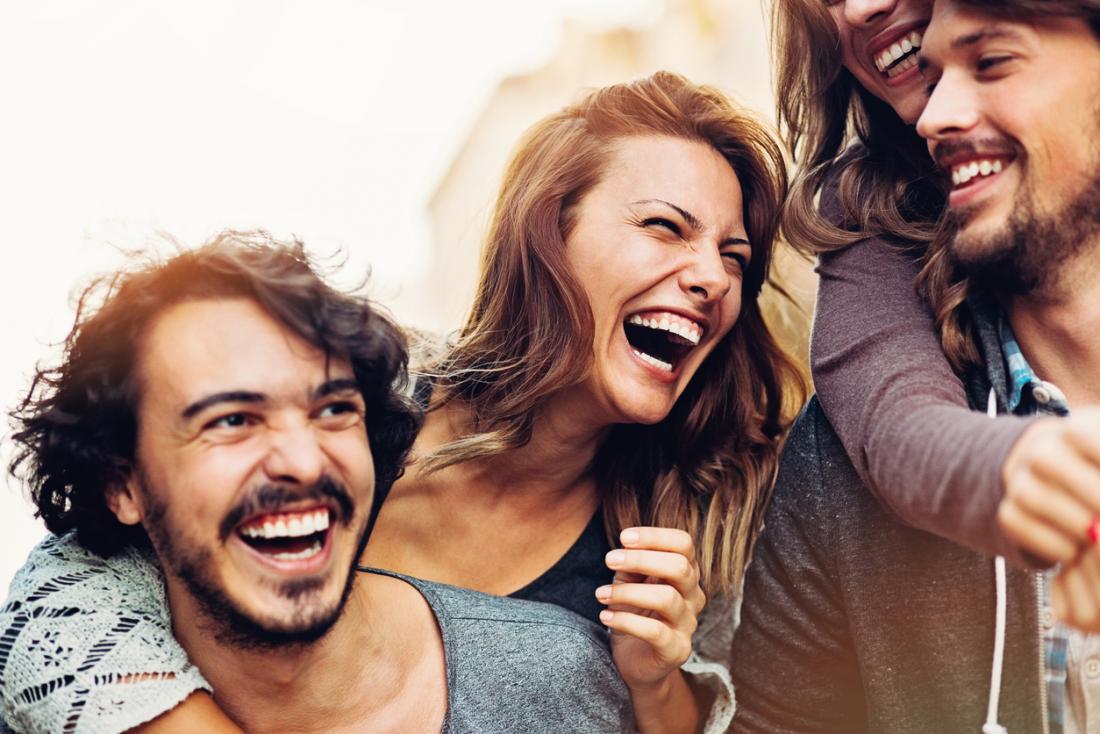 5. LAUGHTER IS AN IMMUNE BOOSTER.

At the beginning of cold and flu season, it may be a good idea to practice some laughter therapy, as several studies have shown the immune boosting power of a chuckle. In one 2015 study on postpartum mothers in the Journal of Alternative and Complementary Medicine, researchers tested hand-expressed breast milk for immunoglobulin (IgA, antibodies that play an important role in immune function) before and after laughter therapy.

Twice a week, participants engaged in group “laughter dance routines” and some light breast massage while inducing laughter. Mothers who participated in the laughter therapy saw a small increase in their IgA. However, even a small amount was significant to the researchers, given that the postpartum period is when natural IgA in breast milk declines (it is at its highest level right after delivery, in the earliest, nutrient-dense breast milk known as colostrum).

Another study with college students found that watching funny movies increases salivary IgA (sIgA). Researchers have also found small examples of laughter’s ability to increase the body’s natural killer cells (NKs), a type of lymphocyte that is easy to test for in the blood. One study in the American Journal of Medical Science, albeit small—a cohort of only 10 male subjects—found significantly increased NK cell activity in the experimental group. Additional studies have shown increases in NK cell activity after laughter therapy or humorous videos, but most of these studies were done on male subjects.

6. LAUGHTER MAY ACT AS A NATURAL ANTI-DEPRESSANT.

While nobody would recommend laughter in lieu of other treatment for depression, it has shown promise at ameliorating depressed moods. Patients in long-term care facilities often suffer from depression and poor sleep, so a 2017 study in the Korean Journal of Adult Nursing [PDF] tested the effects of laughter therapy on 42 residents of two long-term care hospitals. The results were promising.

The results showed reduced depression and general mood improvement as well as improved sleep in the experiment group compared to the control group. Another 2015 study in the Journal of Alternative and Complementary Medicine found that three 60-minute laughter therapy sessions improved the depression and negative mood states of cancer patients.

7. YOU BREATHE BETTER AFTER LAUGHING.

It turns out that a good bout of deep belly laughter can lead to increased heart rate, respiratory rate, and oxygen consumption, which are similar to what happens during exercise. While a 2009 study in the International Journal of Humor Research found that these changes only last as long as the laughter itself, if you can laugh like that for 30 minutes to an hour, maybe you can skip the gym.

8. LAUGHTER IS GOOD FOR YOUR CARDIOVASCULAR SYSTEM.

Your lungs aren’t the only organ that benefits from a great guffaw. A 2009 study in Medical Hypotheses found powerful benefits to the heart and cardiovascular system.

Study participants watched either a comedy like Saturday Night Live or the bleak opening sequence of Saving Private Ryan, which is known to increase mental stress. They used a technique called brachial artery reactivity testing (BART), a form of ultrasound that looks at the brachial artery. Participants who watched the stressful movie experienced a 35 percent reduction in flow-mediated vasodilation (FMD, or how blood vessels dilate and contract); sluggish FMD is a risk factor for atherosclerosis. Meanwhile, the group that watched the funny scene saw a 22 percent increase in FMD, comparable to exercise. In short, laughing helped their blood flow better.